Double Helix: beyond the boundaries of mankind

We enter a large dark space. To our left and right, at eye level, eight identical talking heads protrude from the walls. Come closer, and you can hear them talking about bio-hacking and cryonics. In the two rear corners, seemingly oblivious to us, two creatures are scurrying around: humanoids, one bald and one with sagging skin. Eye catcher in the middle of the room is a large illuminated aquarium filled with a milky liquid. Inside is an enigmatic naked figure — a woman? an unborn? The opaque liquid renders her shadowy. But then she moves towards us and becomes clearly visible. She presses her hand against the glass, and while air bubbles spiral upwards from her mouth she looks us straight in the eye.

I’m in Double Helix, a temporary research laboratory in a semideserted industrial area in southern Germany. Here research is taking place into the future of man: not by mad scientists, but by choreographer Nanine Linning and designer Bart Hess, two Dutch artists with a shared fascination for biotechnology and a thousand square metresempty industrial space temporarily at their disposal. They have created an alienating world, spread over four rooms and inhabited by hybrid beings. Fifty visitors at a time get the chance to roam around in it. I couldn’t believe my eyes. 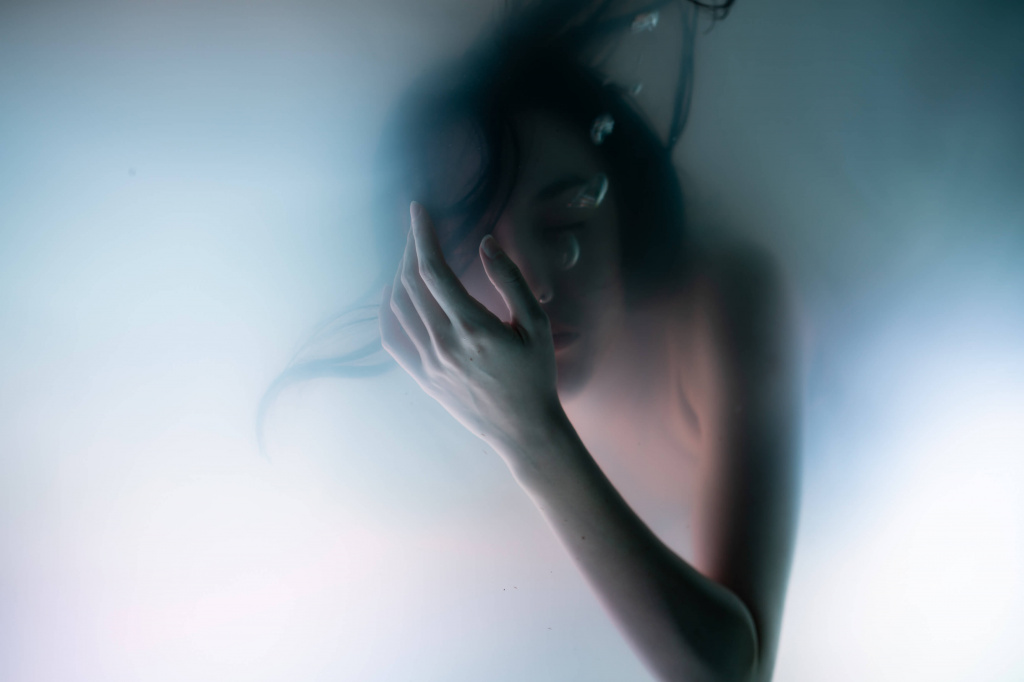 In a large dish, two teenage girls lie like spoons. They’re attached to a strange machine in a shallow pool of water. Transparent hoses sticking out of their mouths are attached to mechanical lungs that pump up and down with an ominous rattle. The girls lie there breathing, helpless and vulnerable. Their eyes are closed like newborn kittens. The girl at the back blindly strokes the hair of the one in front.

These are powerful images that Linning and Hess serve up, but luckily an unambiguous message can’t directly be extracted. We see a whole spectrum of hybrid identities — ranging from mutated people and robot animals to ‘things’ with a mere hint of humanity. This makes us realise that the distinction between humans, animals and machines has gradually faded. As early as 1985 the biologist and philosopher Donna Haraway, in her Cyborg Manifesto, had already made a plea for the pleasure derived from deliberately confusing these boundaries. A cybernetic organism — part organic, part artificial — is a uniquely transgressive being. Anyone considering the figure of a cyborg is challenged to abandon a range of binary opposites that have traditionally dominated western thinking: man-machine, man-animal, man-woman, nature-culture, private-public. These are comfortable ways of classifying the world, but they don’t do justice to the reality.

Identities, according to Haraway, are obviously ‘contradictory, partial, and strategic.’ There is no such thing as a natural or original human being. The cyborg is therefore no futuristic fantasy figure, we are the cyborg. Our bodies have long been fused with technology, with our artificial hips, pacemakers, silicone breasts and botox lips. Our way of being in the world is completely mediated by technology, thanks to all the wearables on our bodies, from smart phones and smart watches to earpods and heart rate monitors. It won’t be too long before biotechnological innovations have erased the distinction between biological and artificial life. Anyone wandering around Double Helix will realise that the boundaries of mankind are rapidly being pushed back.

From the shadows two dancers step into an illuminated square. Bulging silicone suits distort their trained bodies, creating round bulges in unusual places. They perform a jerky synchronized dance, like thoroughbred, cloned laboratory animals set free for the first time. After a few minutes they disappear into the shadows from which they had just emerged. 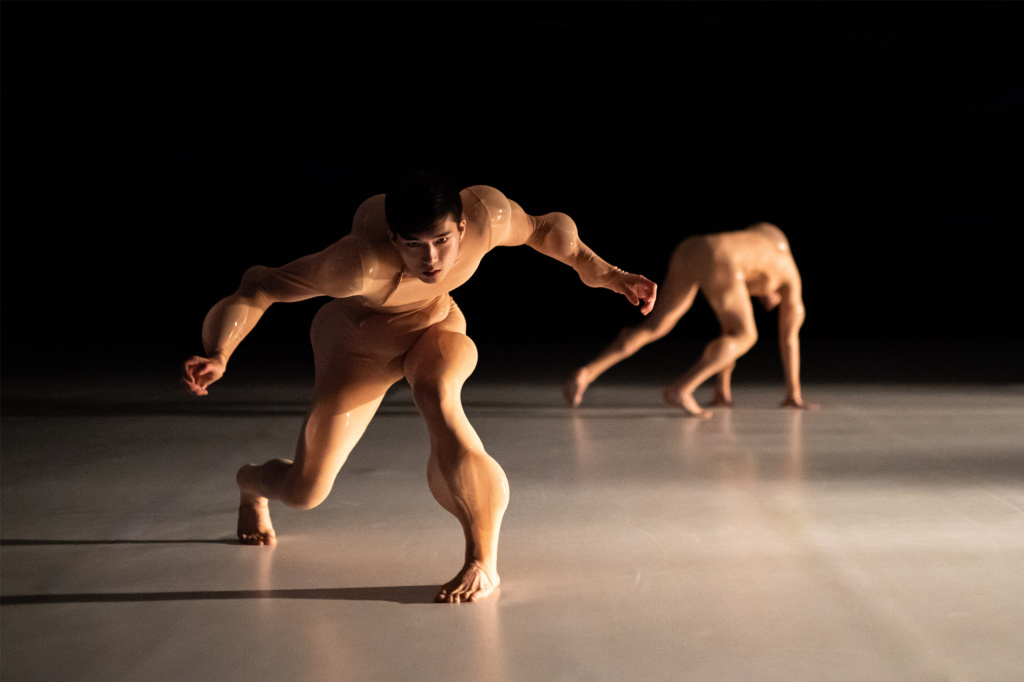 They remind me of the pictures circulating on the internet of Chinese mutant bodybuilder dogs. Genetic modification has removed the myostatin gene from these animals, leading to rampant muscle growth. As I watch the bulky creatures in front of me, I think about another parallel between dance and biotechnology: both cherish the desire to stretch the boundaries of the body. Dancers discipline their bodies daily in the studio, so as to transcend their physical limitations and defy gravity. Modern life scientists are able to directly remove genetic abnormalities from the DNA or add desired properties. Both disciplines refuse to settle for the biological limitations we’ve been given and try to perfect the human body. You could say that bioengineering is the continuation of dance by other means.

The desire to clone bodies is also not alien to the dance world. Traditionally, dancers have been trained to transcend their individuality and merge into a collective body. Think of the classical corps de ballet with its corpus of identical bodies: all the same height, in the same tutus, moving in perfect synchronicity. But while for many dance companies the perfect body is still often the norm, Linning and Hess seem to be fascinated by imperfections. Their world is populated by misfits and mutants, Übermenschen with serious flaws. They are selfabsorbed and barely notice us, the onlookers. None of them seems to be endowed with a rich inner emotional life.

That makes this lab seem like a warning. Yet Double Helix is neither utopia nor dystopia — it shows us no future perfect society or its downside. It is rather what Michel Foucault called a heterotopia: a heterogeneous space, or counter-site. It’s a space in which different realities are ‘simultaneously represented, contested, and inverted.’ A space that is already present and yet remains strange, because we refuse to perceive it. A place that plays with the order of the imagination, that crawls under the skin, opening up a space for astonishment and critical reflection.

Two dancers lie like moving sculptures on black plateaus, intimately intertwined with mechanical worm-like creatures. Another woman seems to live in co-existence with a mountain of crawling ‘mussels’ that envelop her body like a gala dress. She lies motionless in that rustling heap. Only her head and hands stick out. Her back is dangerously curved, her arms hang back and her eyes and mouth are wide open.

Double Helix challenges us in multiple ways to stop thinking in boxes. This is an interdisciplinary lab, beyond the boundaries of dance, a research space at the intersection of performance and exhibition. Although trained dancers’ bodies occupy a central place, the project makes it clear that dance can be so much more than choreography.

Since the beginning of the twenty-first century, museums have increasingly been programming dance within their walls. And more and more choreographers are seeking answers outside conventional theatres with their hierarchical division between stage and audience. In Double Helix, the viewer is given the opportunity to wander freely through the space, so there is less control over your gaze than in conventional theatre dramaturgy. This also clearly evinces a different attitude: some visitors are totally unembarrassed and stick close to the performers or try to elicit interaction, others maintain their critical distance. 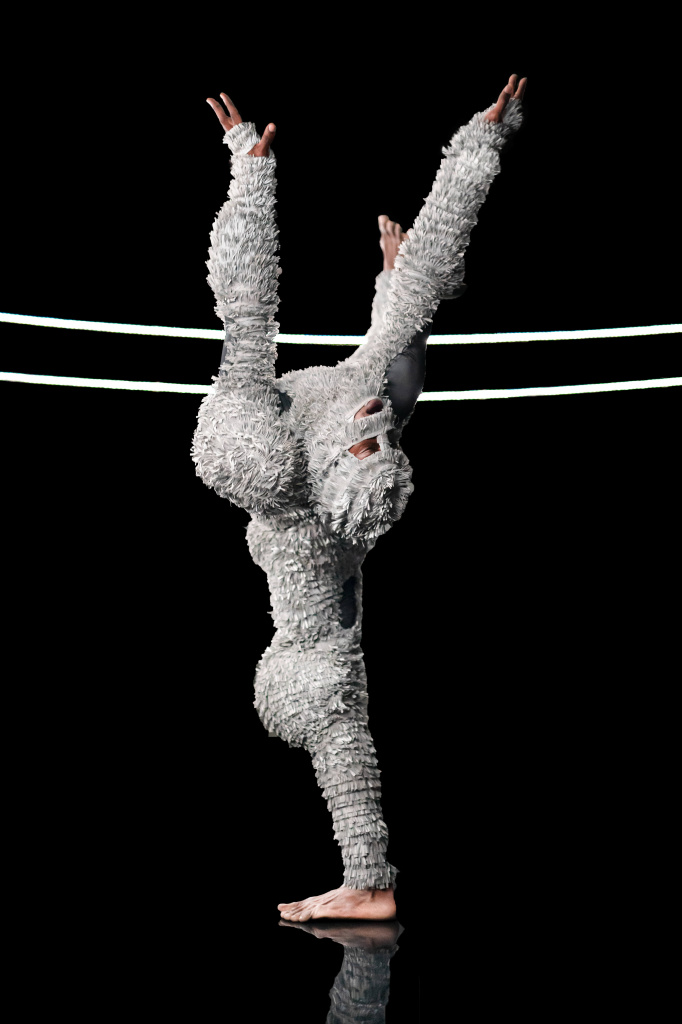 Double Helix is also transdisciplinary: the project goes beyond the boundaries of art and seeks collaborations with such scientific disciplines as robotics and bioethics. There is, for example, a contextual programme with scientists and philosophers. This also fits into a broader development in which the traditional separation between ‘exact’ and ‘creative’ disciplines has become more diffuse. We are now in the middle of the fourth industrial revolution in which robots and artificial intelligence are taking over countless human functions. Biotechnological innovations will increasingly and more radically blur the boundaries between biological and artificial life. Hybrid networks of scientists, philosophers and artists will be able to explore these wicked problems across the board, beyond the boundaries of professional disciplines.

We need this badly, as the consequences of biotechnology are too far-reaching to be left to biomedical scientists and big tech companies. Scientists still too often operate in a moral vacuum, driven solely by the ‘will to knowledge’. Technology companies and the pharmaceutical industry regularly allow their shareholders’ dividends to take precedence over the general interest. Once a new invention appears, it is impossible to undo the knowledge. As soon as the first applications come on the market, they contribute to the normalization of this technology: our morality moves with the technology we use.

Linning and Hess immerse you in a physical experience that makes you think about the consequences of these changes. Because they approach this issue affectively rather than cognitively, their clout is many times greater. That is why I am pinning my hopes on artists and designers to politicize technology. It is artists in particular who allow us to experience powerful visions of the future that stimulate public debate. It is high time we had such debates, the future of mankind is at stake.


Jappe Groenendijk — is a philosopher, writer and dramaturge. He is affiliated with the Amsterdam School of the Arts, where he heads the masters in Arts Education and teaches philosophy of art. He also works as a music-theatre and dance dramaturge.

A Dutch version of this essay appeared in rekto:verso, a journal for culture and criticism