The vast legacy of Wolfgang Amadeus Mozart includes about 50 symphonies, however only two of them are written in a minor key, and both are in G minor. The first of the above-mentioned symphonies, No. 25, KV 183, according to the numeration of the 19th century, was composed by the seventeen-year-old Mozart at the end of 1773, after his return to Salzburg from Italy. The second one, No. 40, KV 550, was created in the summer of 1788 and became one of the most famous compositions not only among Mozart’s works, but also in world classical music.

It is known that the symphony was completed on July 25, 1788, as dated by Mozart himself. It is likely to be the only documentary evidence left by the composer regarding his enduring masterpiece. Mozart never mentioned composing or performing it, let alone explained the meaning of his symphony. The famous letters to his fellow member of the Masonic lodge, Michael von Puchberg, dated June-July, 1788, contain Mozart’s request to borrow some money. They are evidence of the dire financial situation, in which Mozart found himself, though being the author of already staged operas Le nozze di Figaro and Don Giovanni. However, they give no reason to associate the dramatic tension of Symphony No. 40 with the life’s struggles of its creator. Hermann Abert, who wrote a major biography of Mozart, rightly points out that the “dark forces” that prevail in the G minor Symphony “originate from a completely different, more sublime reality than everyday life, and thus they shake souls more severely than the latter.”

Mozart’s contemporaries definitely felt the difference in his music from other typical compositions of those times. Twelve years later, after the composer’s death, the G minor Symphony was perceived as “the representation of the great soul seized by Passion, in transition from the deepest suffering to greatness.” The following generation of romanticists singled out Symphony No. 40 from the entire corpus of Mozart’s symphonies. It was perceived as being the closest to their tragic worldview, along with the myth of “a lonely, misunderstood artist who writes without any publication prospects,” and the image of “the soaring Grace” invented by Robert Schumann. In fact, despite all the “liberties” Mozart took, he drew heavily on the tradition, including the rhetorical one, rooted in the Liturgy, and especially in the Holy Week services, when appealing to the theme of suffering. At the same time, if to compare Mozart’s Symphony No. 40 with “the Holy Week” symphonies by Haydn, one can clearly see its exceptionality and incredible novelty, which are astounding even today.

Symphony No. 40 surprises literally from the first bar of the score. Mozart writes it down “horizontally” (i.e. each instrument in turn) and starts the composition not with a melody, but with swinging figurations in the violas part, creating a quivering “swell.” Against this background the famous melody appears. It is noteworthy that Pyotr Ilyich Tchaikovsky opens his Symphony No. 1 in G minor in the same way 78 years later.

Many music experts rightly compare the main theme of Symphony No. 40 with the entrance aria of a young page Cherubino “Non so più, cosa son, cosa faccio” (“I do not know what I am, what do I do?”) from Le nozze di Figaro completed by Mozart two years earlier. But despite that, one should not let the opera associations divert the attention from the amazing melodic and intonational work that Mozart carries out throughout his score. Every breath, every gesture, every line, every beat becomes the participant of an incredible play, holding the attention completely. In Don Giovanni, as well as later, in Die Zauberflöte, and in a number of other instrumental masterpieces, in his G minor Symphony Mozart dives into the depths that frighten and mesmerize at the same time, space where familiar objects lose their familiar outlines. The austere Apollonian façade hides the Dionysian abysses. No wonder that yet at the beginning of the 19th century, aestheticians criticized Mozart for implementing too striking contrasts, e.g. “a shepherd and a warrior, a flatterer and a brave man.”

An attentive listener can easily notice that a typical for the 18th century operas lamento is at an incredibly fast tempo in the first movement of Symphony No. 40. Later, in the deliberately ceremonial nature of the second movement the terrifying “steps of the Commander” are suddenly heard. The minuet is not properly danced, but constantly “falls out of step.” The final movement at the beginning of its development is sharply interrupted by abrupt unisons in different instrument parts. Mozart does not mute the tragic culminations of Symphony No. 40, as the romanticists will do later. His musical instruments resemble a scalpel being very thin and sharp. But to hear and understand that, one has to pay attention, to put aside familiar patterns and stereotypes, and to listen to this music as if it were the first and the only chance in his life. 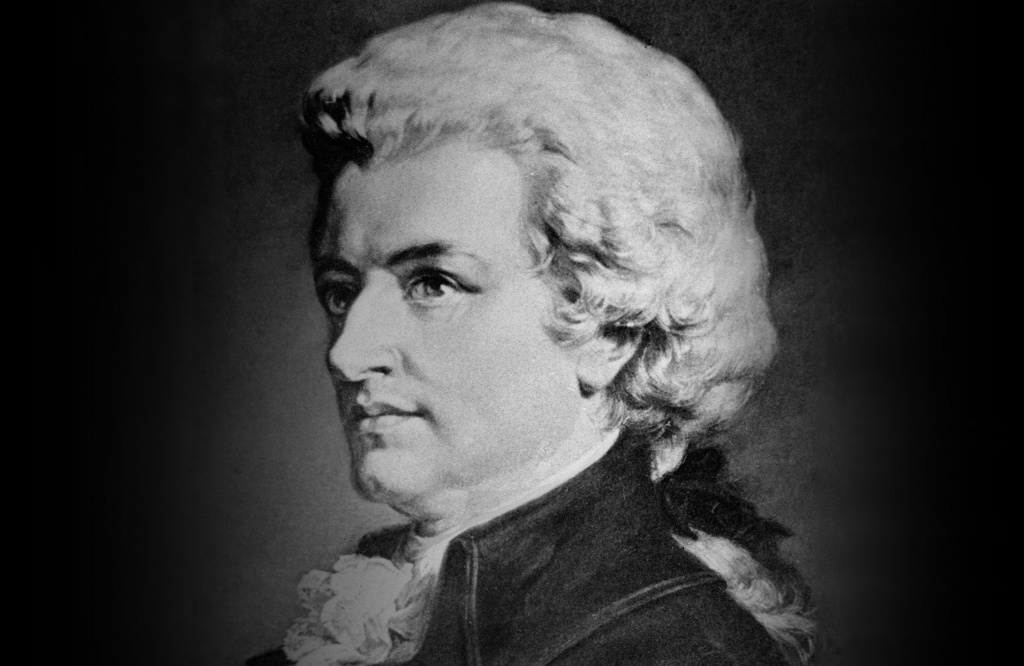 “Mozart and Freemasonry” is one of the most intriguing themes in the composer’s biography. After having moved to Vienna, the composer became acquainted with the teachings of Freemasons. The papal decree issued by Clement XII threatening to excommunicate those who joined the secret order had no real power in Vienna. Therefore, despite being a lifelong God-fearing Catholic, Mozart could join the ranks of Masons without fear — he clearly sympathized with the ideas of brotherhood, freedom and mutual support. As Alfred Einstein once noticed, “for Mozart, freemasonry was the embodiment of pursuit of moral purification, work for the good of mankind, reconciliation with death.”

On December 14, 1784, Mozart was admitted into Freemasonry as an Apprentice to the lodge “Zur Wohltätigkeit” (Beneficence) in the degree of Apprentice, and as early as the summer of 1785 he was initiated in the degree of Master Mason. That was exactly the period when the work named “Maurerische Trauermusik” for wind and string instruments (KV 477) was brought into being. For a long time, it was believed that the work was timed to coincide with the burial of highranking nobles from the Masonic Circle, Duke George Augustus of Mecklenburg-Sterlitz and a Hungarian court counsellor Count Ferenc Esterházy de Galántha. However, the death of both important persons occurred in November 1785, while the music had been dated July by Mozart himself. Apparently, the music was composed by Mozart to his own initiation, and later was used for the funeral ceremony (its performance has been documented at least twice, at the memorial meetings of the lodges “Zur Neugekrönten Hoffnung” (New Crowned Hope) on November 17 and “Zu den drei schwarzen Adlern” (The Three Eagles) on December 7). Only the instrumental version of this work has survived to our time, however, at first the choir took its part in the performance by singing the stanzas from Prophet Jeremiah’s Book of Lamentations (“He hath filled me with bitterness, he hath made me drunken with wormwood… Waters flowed over mine head; then I said, I am cut off”) to the tune of the Gregorian chants of the first mode. The French researcher Philippe Otesquier suggests that during the singing of these stanzas the «trial by earth and water» took place.

The style of Maurerische Trauermusik indicates its connection with musical works for church. The key C minor is related with never finished “Great Mass” that was performed in Salzburg and was later transformed into the cantata Davide penitente, and the general mournful character of the sound has much in common with Haydn’s “passion” symphonies which, of course, Mozart was very well familiar with. Mozart subsequently created a number of other works for Masonic ceremonies, including his last completed opus of the cantata “Laut verkünde unsre Freude” (“Announce Loudly Our Joy”) KV 623, which he conducted not long before his death on November 18, 1791.

Mozart’s last symphony in C major, completed on August 10, 1788, got its name “Jupiter” only at the beginning of the 19th century, almost 30 years after the death of its creator. Mozart’s son, Franz Xaver, believed that it had been nicknamed by the conductor and impresario Johann Peter Salomon, the organizer of both Haydn’s trips to London. It is difficult to say now whether that was the case, as the first public notice of this name of the Mozart symphony occurred in 1819 in the Edinburgh concert program, when Salomon had been dead for four years. In 1822, the composition, transcribed by Clementi and titled “Jupiter,” was published in London, and since then this nickname has taken root on the title page.

One of the brightest and most thoughtful interpreters of Mozart of the second half of the 20th century, the Austrian conductor Nikolaus Harnoncourt rightly argues that Mozart’s last three symphonies were intended to be some kind of “instrumental triad,” where one can easily trace melodic and intonational coherence. When comparing Symphony No. 41 in C major with the preceding one, No. 40 in G minor, Harnoncourt writes that the tempo in No. 40 slows down gradually (“each movement slows down metrically”), and in No. 41, on the contrary, it accelerates (“we see accelerando marked by the composer”). In contrast to the subjective and passionate Symphony in G minor, which reflects the tragic edge of earthly existence, the Symphony in C major, despite all its heroic power, is illuminated by light humor. Mozart seems to be recapitulating and finally confirming the symphony as a serious rather than entertaining musical genre that requires the listener’s attention and participation.

“Jupiter” opens with a powerful unison tirata of violins and wind instruments, followed by a sensitive arioso response from the string quartet. Similar juxtaposing of will and obedience, “male and female,” can be traced in several Mozart’s works (for instance, in the overtures to his operas Idomeneo, La clemenza di Tito, or in the introduction to the Prague Symphony in D major). In the first movement of “Jupiter”, the dialogues seem to be carried into the space of a comic opera, where humor is omnipresent and shadows are transient. It is no coincidence that in the second subject group, Mozart quotes his arietta “Un bacio di mano” (“My dear Pompeo”) KV 541, composed as an insert number for Pasquale Anfossi’s opera to the libretto by Lorenzo Da Ponte La gelosie fotunade (Happy Jealousy). In its turn, the imagery of the second movement resembles Beethoven’s philosophical adagios with their instantaneous shift from light to shadow and vice versa (it is probably no mere chance that Beethoven included this very symphony in the program of his first Vienna Academy). The third movement, the minuet, with its chromatic descending theme converges with the second subject part from the first movement of the symphony in G minor. Mozart’s seemingly uncomplicated slides are skillfully enriched with witty “nods,” which refer us not so much to Haydn as to Beethoven’s irreverent humor. And in the end, the dazzling finale where the composer demonstrates his incredible mastery of counterpoint.

Pyotr Tchaikovsky, who adored all Mozart’s works and called him the “Christ of music,” wrote in one of his critical articles: “Mozart’s symphony “Jupiter” is one of the miracles of symphonic music, above all due to its finale, where the polyphonic genius of the great master, who possessed the ability to construct colossal buildings from minor material, manifested itself in all its incomprehensible power.” The great Russian composer happened to misjudge the “minor material.” The first theme of “Jupiter’s” finale, recited in whole notes, is a quote from the Gregorian hymn “Lucis creator” (The Creator of Light). This motif is stated by the French horns in the very first symphony of the eight-year-old Mozart, makes an appearance in the hymn “Credo” in his juvenile mass KV 192 and, finally, concludes his last symphony, proclaiming the Kingdom of God, of light, of the good and the truth, trampling on evil and eventually triumphing over all miseries.